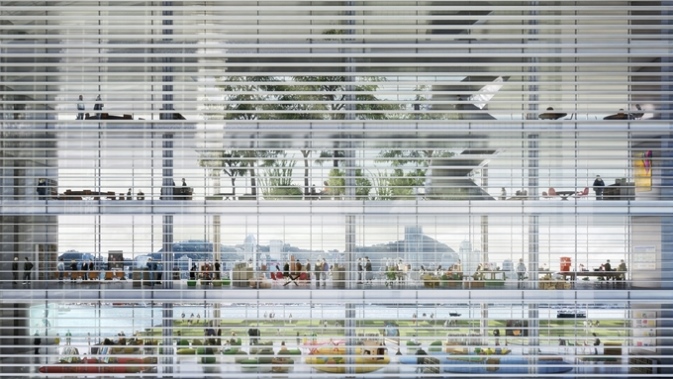 The School of Architecture at The Chinese University of Hong Kong is pleased to announce the 2015 Kinoshita Lecture in Architecture will be given by Jacques Herzog. This event is generously supported by Mr. James Hajime Kinoshita.

Jacques Herzog established Herzog & de Meuron with Pierre de Meuron in 1978 in Basel. The partnership has grown over the years; today the practice is led by five Senior Partners – Jacques Herzog, Pierre de Meuron, Christine Binswanger, Ascan Mergenthaler and Stefan Marbach. Herzog & de Meuron have designed a wide range of projects from the small scale of a private home to the large scale of urban design. While many of their projects are highly recognized public facilities, such as their stadiums and museums, they have also completed several distinguished private projects including apartment buildings, offices and factories.

Jacques Herzog was born in Basel in 1950. He studied architecture at the Swiss Federal Institute of Technology Zurich (ETH) from 1970 to 1975 with Aldo Rossi and Dolf Schnebli. He received his degree in architecture in 1975 and became an assistant to Dolf Schnebli in 1977. Jacques Herzog is a visiting professor at the Harvard Graduate School of Design since 1994 (and in 1989). He is a professor at the ETHvZurich since 1999 and co-founded the ETH Studio Basel – Contemporary City Institute in 2002. In 1983 he was a visiting tutor at Cornell University.

The practice has been awarded numerous prizes including “The Pritzker Architecture Prize“ (USA) in 2001, the “RIBA Royal Gold Medal“ (UK) and the “Praemium Imperiale“ (Japan), both in 2007.

Selected Works
Herzog & de Meuron received international attention very early in their careers with the Blue House in Oberwil, Switzerland (1980); the Stone House in Tavole, Italy (1988); and the Apartment Building along a Party Wall in Basel, Switzerland (1988). The firm’s breakthrough project was the Ricola Storage Building in Laufen, Switzerland (1987). Renown in the United States came with Dominus Winery in Yountville, California, USA (1998).

Their most recognized buildings include Prada Aoyama in Tokyo, Japan (2003); Allianz Arena in Munich, Germany (2005); the new Cottbus Library for the BTU Cottbus, Germany (2005); the National Stadium Beijing, the Main Stadium for the 2008 Olympic Games in Beijing, China. Herzog & de Meuron‘s recently completed buildings include VitraHaus, a new building to present Vitra‘s “Home Collection“, Weil am Rhein, Germany (2010); 1111 Lincoln Road, a multi-storey mixed use structure for parking, retail, a restaurant and a private residence in Miami Beach, Florida, USA (2010); Actelion Business Center in Allschwil/Basel, Switzerland (2010); Museum der Kulturen in Basel, Switzerland (2010); Museu Blau, Museum of Natural Sciences, in the transformed Forum 2004 Building in Barcelona, Spain (2012); and the transformation of the Volkshaus Basel, which aims to revitalize the diversity of this location, while at the same time restoring its architectural identity (re-opening of Bar and Brasserie in 2012). In 2013, Herzog & de Meuron completed the New Hall for Messe Basel, Switzerland.

Research and Teaching
Jacques Herzog and Pierre de Meuron are both visiting professors at Harvard University, Graduate School of Design (GSD), USA, since 1994 (and in 1989). They are professors at the Swiss Federal Institute of Technology Zurich (ETH) – Department of Architecture, Network City and Landscape, since 1999, and co-founders of the ETH Studio Basel – Contemporary City Institute. The ETH Studio Basel started a research programme on processes of transformation in the urban domain. Their research activities are documented in various publications: “Switzerland. An Urban Portrait” (2006) investigating the urban condition of Switzerland; “Open – Closed: Canary Islands“ (2007) focusing on the urbanisation process on the Canary Islands; and “MetroBasel Comic. A Model of a European Metropolitan Region” (2009) on the development of the tri-national region of MetroBasel; and The Inevitable Specificity of Cities (2014), a study of the evolution of the contemporary city.